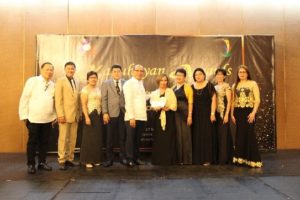 The Cassava Growers and Processors Association (CAGAPA) of Aseniero, Dapitan City was proclaimed as the National Winner in the recently concluded 2018 Search for Best DOLE-Assisted Livelihood Projects Group Category held at Prince Hotel, Ermita, Manila on May 27, 2019.

Regional Director Ofelia B. Domingo shared that out of several entries from different regions in the country, CAGAPA’s Cassava Chips Making Project or its Cassava Chips won First Place under the Group Category with monetary award of ₱100,000.00. The association also received ₱50,000.00 being DOLE 9 Regional Winner.

CAGAPA, a group of farmers, housewives and unemployed adults with initially 14 members organized themselves with a common goal of uplifting the economic condition of their respective family sometime in June 2014.

With a start-up capitalization of ₱20,000.00, and with the assistance of the Local Government Unit of Dapitan, they started the processing of cassava chips, a nutritious “finger food” with cassava as the main ingredient. The increasing demand of the cassava chips from customers who had tasted the CAGAPA cassava chippy, also marks an increase in the raw material demand from cassava farmers.

On August 24, 2015, DOLE 9 through the Zamboanga del Norte Field Office provided a livelihood enhancement worth ₱238,432.00 through provision of tools, equipment and raw materials for the expansion of the CAGAPA Cassava Chips Making Project while the Local Government Unit of Dapitan as the Accredited Co-Partner provided the processing center worth more than ₱5 million.

DOLE’s livelihood assistance to the association had pulled the trigger for additional interventions and recognition from other agencies and institutions. which led to the creation of sustainable jobs for the 129 members who are the workers at the same time.

CAGAPA as Food Manufacturer is issued with License to Operate from the Department of Health – Food and Drug Administration and its Cassava Chips Production is HALAL Certified by the Muslim Mindanao Halal Certification Board Inc.

The association was proclaimed as the champion of the 2017 National Cornucopia Awards in recognition of their contribution to the value adding of corn and cassava for the development, production and commercialization of various processed products with a prize of ₱2 million pesos.