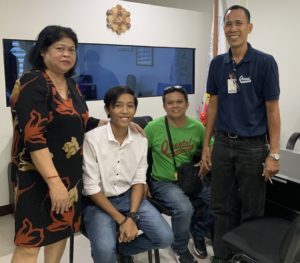 Mr. Valentino F. Aragones was all smiles watching his son, Ian Carlos, sign a scholarship contract with the Department of Labor and Employment Region 9 (DOLE 9) in its office in Zamboanga City one fine Friday morning.

DOLE 9 Regional Director Ofelia B. Domingo affixed her signature right beside the scholar’s name & signature which meant that Ian may begin his college freshman year as a BS Civil Engineering student at Western Mindanao State University as soon as classes begin this June.

Mr. Aragones works as a stock room clerk for Oriental Tin Can, a factory that manufactures tin cans for sardines companies in the west coast of Asia’s Latin City.

Working in the company for 6 years, Mr. Aragones only earns minimum wage, now pegged at PHP 316.00 for Region 9, which he says isn’t enough to send both of his children to school. Aside from Ian he also has a daughter who is in the 8th grade.

“My wife decided to go abroad to work as a domestic helper in hopes of a better future for our family. She just left this year so it is still quite a challenge for us since we have debts to pay on top of our children’s needs”, he said.

“I am a member of the Oriental Tin Can Zamboanga Employees Union. So it was a blessing when our Union President, Mr. Romeo A. Peñales, informed us during a meeting about the scholarship that DOLE is offering to dependents of union members. He told us that if we were interested, we should just complete the requirements.”

Mr. Aragones and his son wasted no time in applying for the said scholarship which is under the Workers Organization Development Program (WODP).

Director Domingo said that the WODP is a DOLE flagship program launched in September 1994 in line with the DOLE’s mandate to strengthen trade unionism and other workers’ organizations by promoting their capabilities as independent and active partners in national development.

The DOLE extends coverage of the WODP scholarship grants to legitimate dependents of officers and members of locals/chapters of independent labor federations and independent unions.

Under the scholarship, Ian Carlos will receive cash and book allowance throughout the duration of his college education.

For this year, DOLE 9 maintains nine (9) scholars coming from different provinces in Region 9.

“I am thankful to DOLE for granting the scholarship as it is a great help to my family. It will lessen the burden of my parents financially,” Ian shared.

Mr. Aragones, smiling broadly, told his son, “All I ask of you Ian is that you do well in your studies and that you do not waste the opportunity DOLE afforded to us.”

And to that, Ian replied a solid yes. END/KCG