In 2017 and years prior, the lack of access to government programs and services such as education and employment opportunities in Baguindan, Tipo-Tipo, Basilan motivated young rebel minds to go against the government and initiate bombing and kidnapping activities in the province. This became their sole means of providing for their families.

In an interview with Moton Indama, a former ASG Commander, on what really motivated him to join the rebels, he said that he joined the group because of ignorance at the age of sixteen (16), lack of education and influence from his father and relatives who were rebels. He believed that his participation meant the legacy of his father will live on.

“We’d rather hold guns than pencils before,” said Indama hinting that at a young age, he learned how to skillfully maneuver high-powered guns. He also mentioned that his team was involved in the series of bombing and kidnapping activities in Basilan way before they availed the PAVE of the Provincial Government of Basilan.

PAVE was short for Program, Against Violent Extremism, a program of the Provincial Government that employs a holistic approach. PAVE was successful in transforming the minds of the young rebels under Commander Indama’s group as they were provided with education and training programs in 2018 to mid 2020. However, these government interventions fell short due to lack of employment opportunities in Basilan.

This was when the Department of Labor and Employment came into the picture. In collaboration with the Office of Congressman Mujiv Hataman, City Public Employment Service Office and Nagdilaab Foundation Incorporated, DOLE Isabela City Field Office implemented a province-wide (to include Isabela City) emergency employment program or more known as the Tulong Panghanapbuhay Para sa Ating Displaced/Disadvantaged Workers (TUPAD) in October 2020. 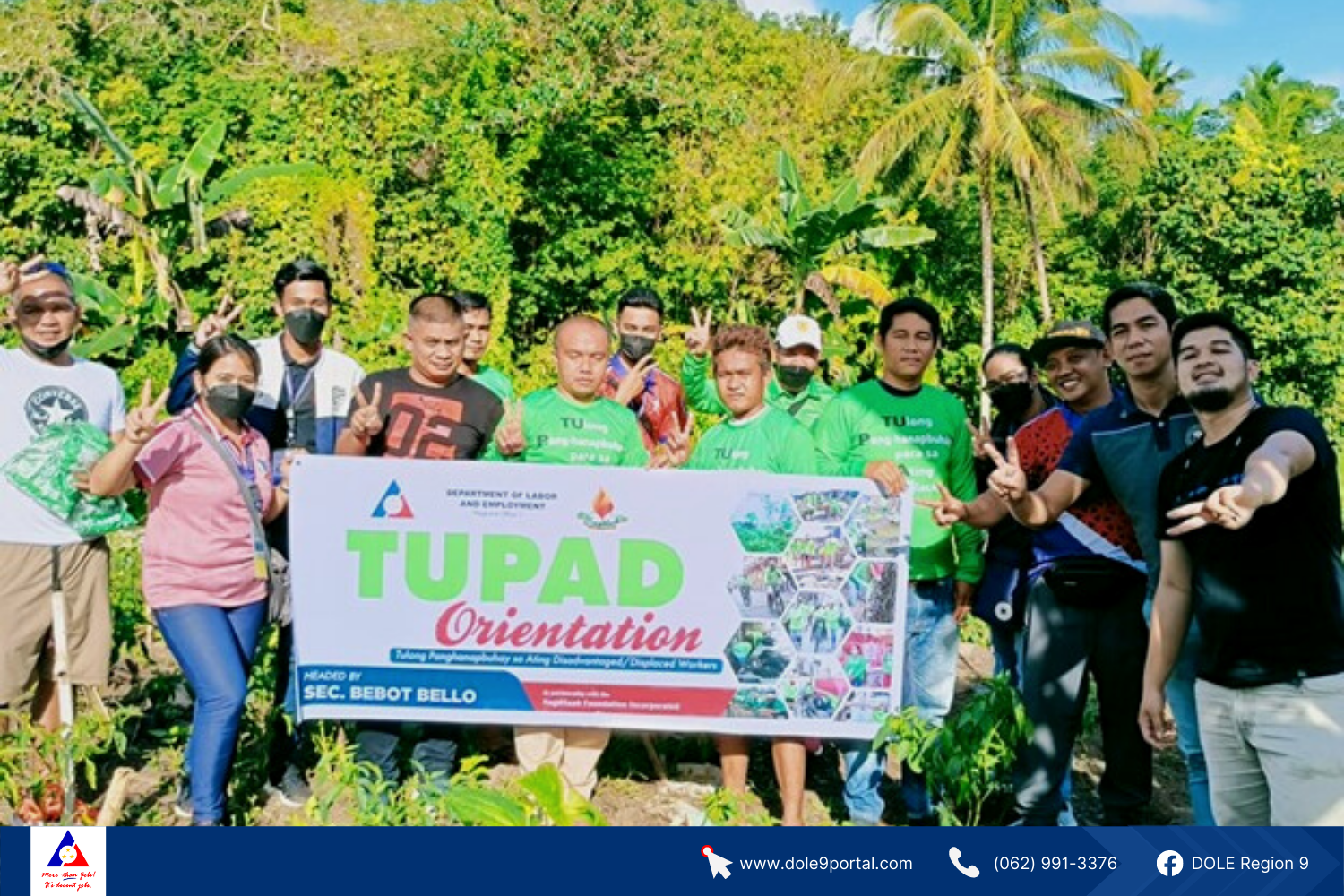 TUPAD or Tulong Panghanapbuhay sa Ating Disadvantaged/Displaced Workers is a community-based package of assistance that provides emergency employment for displaced workers, underemployed and seasonal workers, for a minimum period of 10 days, but not to exceed a maximum of 30 days, depending on the nature of work to be performed.

Each worker received a salary of P 4,740.00, personal protective equipment (PPE) in the form of sweatshirt and cap and enrolment to accident insurance coverage under the Group Personal Accident Insurance (GPAI). The workers were also oriented on Occupational Safety and Health to ensure safety in the performance of their day-to-day tasks.

Going beyond the usual TUPAD projects or activities, such as clean-up drives, declogging of canals and tree planting, the implementing team included a unique project in line with sustainable agriculture – vegetable farming.

While most of the beneficiaries resorted to backyard gardening for 15 days, Commander Indama’s group pooled their resources together to pursue vegetable farming as a group in Baguindan, Tipo-Tipo, Basilan with Indama as the now Project Manager.

Through the regular TUPAD monitoring, Indama’s group brought several issues and concerns to the table which included the need for more seeds, access to market and trainings relative to financial literacy. In true manner of convergence, DOLE along with Nagdilaab Foundation Inc and other partner agencies provided the group’s needs.

Unlike other beneficiaries of the TUPAD in year 2020, the team of Mr. Indama has uniquely performed their task as TUPAD workers, they even went beyond what was required of them. They established a sustainable vegetable farm in Baguindan, formerly a war zone area, where the ASG kept their kidnapped victims and fought against the military troops. 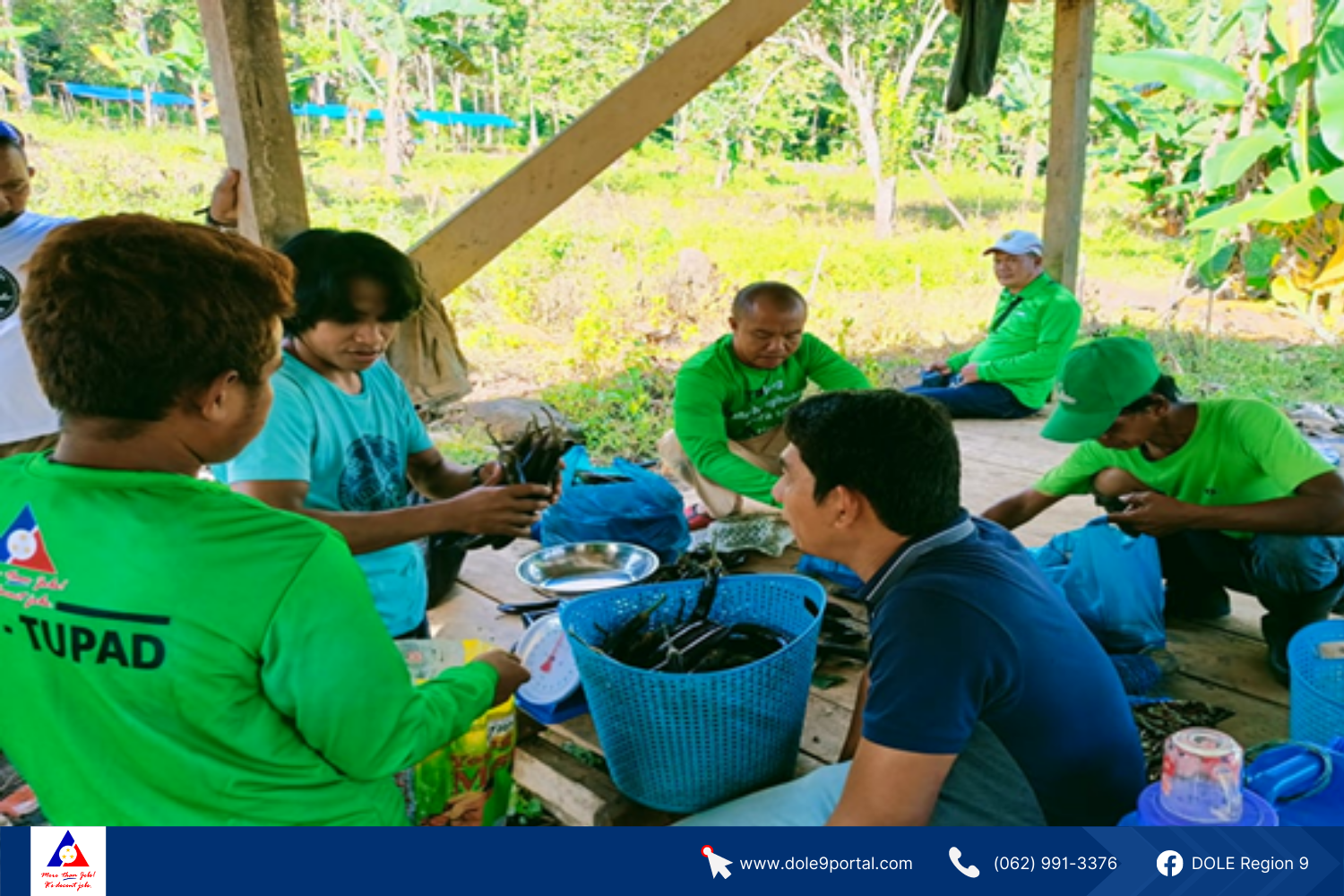 The farm’s sales average P15,000.00 a week and has earned over P 1.5 million in a year from vegetable farming. At present, the project employs 80 rebel returnees who are directly involved in the operation of the project.

The Commander turned Farm Manager expressed his gratitude to DOLE for the TUPAD Program.

The TUPAD Program provided an avenue for former rebels to totally surrender to government to fully focus on farming. This also paved the way for these rebel returnees to become partners in peacebuilding not just in Baguindan, Tipo-Tipo, a former war zone area but to the entire Province of Basilan. The vegetable farming project under the TUPAD has transformed the minds of the former rebel returnees from holding guns for their security to holding bolos for sustainable vegetable farming in Basilan. ###