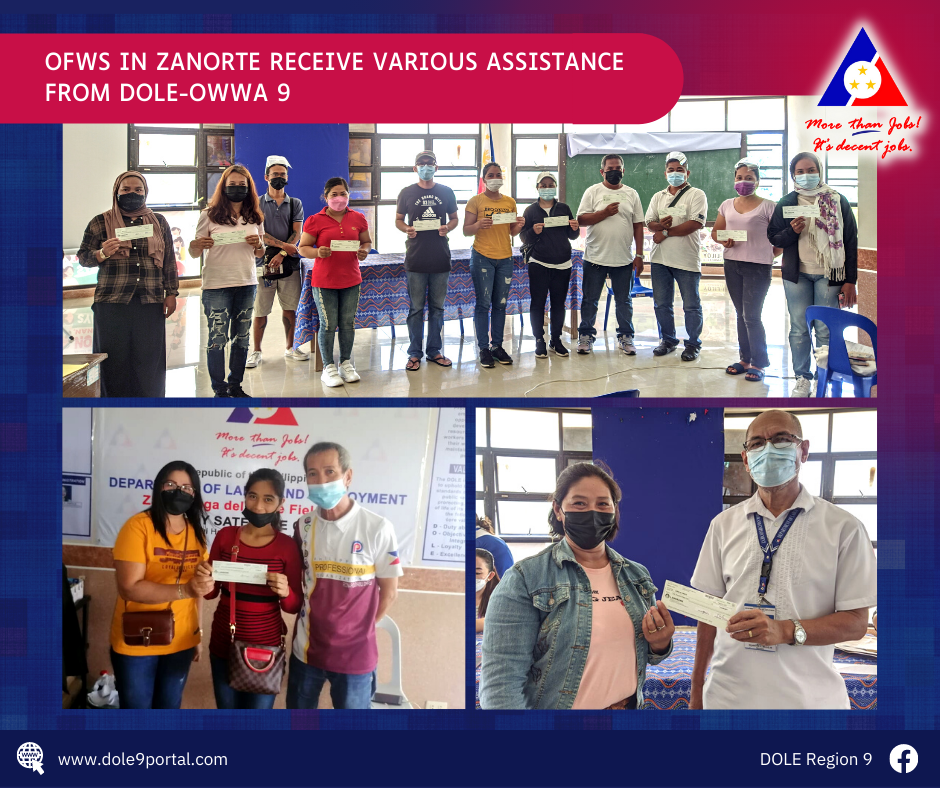 A total of 64 individuals received checks in the amount of 5,000 to 20,000 under the Balik Pinas, Balik Hanapbuhay (BPBH) from September to October 2021. Out of this number, 4 hailed from Sirawai Municipality while the rest were from Liloy Municipality.

The BPBH program provides financial assistance to OFWs for them to start their livelihood undertaking as entrepreneurs.

Aside from the cash grant, beneficiaries were also provided with Financial Literacy Training to prepare and equip them with appropriate entrepreneurial skills and mindset as they venture into their chosen respective business. DOLE also provided an orientation of its programs and services.

A grant under the Project Educational Assistance through Scholarship during Emergencies (EASE) was also awarded to an OFW beneficiary. Project EASE is an educational assistance worth P10,000 given to qualified dependents of active OWWA members.

The said association was the first-ever beneficiary of Tulong Pangkabuhayan sa Pag-unlad ng Samahang OFW or commonly known as TULONG PUSO under the 3rd district of Zamboanga del Norte. The grant was based on the proposal they submitted which was approved for funding.

OWWA 9 Regional Director Ron Bartolome personally handed the checks to the OFWs. He expressed his congratulations to the Association and encouraged them to work hard to make it successful. He also encouraged other OFWs to organize themselves and apply for Tulong Puso program.

Michelle Evangelista, Association President expressed her gratitude to OWWA, DOLE, PESO and DTI for the assistance provided to them.

Prior to the cheque turnover, representatives from OWWA, DOLE, PESO and DTI conducted a Site Inspection at their proposed project site at Goin, Liloy, Zamboanga del Norte last April 8, 2021. DOLE and PESO provided technical assistance on the formation of their association while DTI helped them on coming up with their project proposal. ###